As we near the end of the fourth week of the season, here is what has recently caught my attention.

Entering play Thursday night, almost every team has played at least ten games. With that, team statistics are becoming less of an anomaly and more concrete and worthy of critiquing. The Lakers, who across the board admitted that the efforts of last years rendition did not commit to the less glamorous end of the floor, have put forth a concerted effort on that end. Yes, they addressed a few of their defensive issues with both coaching and roster changes (specifically the additions of Anthony Davis, Dwight Howard, Javale McGee, Avery Bradley, and Danny Green) but their attention to detail on that end as a collective unit is apparent. As mainstays, Caruso and LeBron have been the other contributors. Each of these players has one thing in common, stature. That is something the Lakers have surely taken into account with their roster construction. 11 games in now, they are second in the NBA in defensive rating. They are getting it done with ELITE rim protection for 48 minutes a game as well. First in blocks per game (7.4!), they’re led by Davis with 2.9, followed by Howard with 1.5, then 1.2 per game from McGee. They’re sixth in the league in points allowed in the paint (43.5) and also draw about 1.27 charges per game, which is top ten. They’re establishing an identity as a no nonsense team on that end, as they’ve been better than expected. That has catapulted them to a 9-2 record, sitting atop the Western Conference.

Young guards have taken the league by storm so far this season with highlight plays, unexpected ascension or effectiveness exceeding expectation, and big performances. Of all the young guards getting it done nightly, Ja Morant is at or near the head of this group. The 6’3 guard comes into the league with a well advertised handle and acumen for passing the ball and finishing at the basket. Wednesday night, ending with one last explosive finish at the basket to win the game (with THREE Hornets defenders surrounding him), he displayed those aforementioned skills to the tune of 23 points, 11 assists, and 10-15 from the field. 11 games in now, he is averaging 18.3 ppg and 5.8 apg on 48.3% from the field and 44.4% from deep. He is doing this in just 27.5 minutes per game as well, which is a lot lower than the minutes a typical first selection plays. His feel for the game exceeds that of a typical guard in their first season, this kid is special! He is still raw and adding to his game, but he has enough already to see that he will be an all star. He’s already mixed it up with the likes of both Kyrie Irving and James Harden in his rookie campaign, and he’s gotten the best of both on a handful of possessions as well. Morant is indeed on his way, keep an eye on him down there in Memphis.

One of the most talked about, and equally annoying topics the last few seasons in load management. Most recently, after the Clippers were fined $50,000 a week ago because a statement made from the franchise was “inconsistent with Kawhi Leonard’s health issues.” The entire conversation has spiraled out of control due to fan outrage, which is completely understandable. When you pay to watch a team and the best player is not available and for no apparent reason, there is a right for outrage as the customer. Now imagine traveling hours or across states for a game to see a specific player, and this situation arises. It is completely understandable from the fan and customer perspective. However, it is also just as understandable from a franchises perspective as well. The teams have invested millions of dollars into their training staffs and those individuals on the training staff are focusing more and more on preventative procedures to have their franchises players in peak condition as deep into the season as possible. We all understand that the 82 game season (which seems to be an era coming to an end soon) is very much a marathon. We all understand that these players are not robots. They are humans. Everyone also saw how the Raptors managed Kawhi Leonard last season and the benefits they reaped from being cautious with him. Kawhi himself directly pinpointed load management as the main reason his body held up through the playoffs. My perspective on the entire ordeal is that as a consumer, competitor, and fan, it is tough to see players seemingly sit games for no apparent reason. However when the ultimate goal of a championship is a shared aspiration between all parties involved, there really is no other way around it than to let the players exercise their understanding of their bodies.

Over the summer, after another playoff exit at the hands of the Golden State Warriors, there was plenty of speculation as to what the Rockets both should and would do with their roster. Of that speculation, there was rumor (which was shot down as untrue by GM Daryl Morey) that Chris Paul could be traded. Morey’s shooting down of those rumors were then followed by rumors that there was friction and tension between Paul and Harden, stemming from the 2019 playoffs series vs the Warriors. Paul was in disagreeance with their offensive attack (lead by even more isolation ball than the norm in Pauls tenure) as well as Harden’s body language and lack of willingness to remain relevant in the team’s offense whenever he did not have the ball. Even with those instances of rumors arising, GM Daryl Morey responded stating that that was “typical communication between two hungry and highly competitive individuals.” This week, on Kevin Hart’s “Cold As Balls” show, CP3 was forced to comment on that specific situation which ended in him being sent to OKC even after verbal confirmation that he would not be traded. 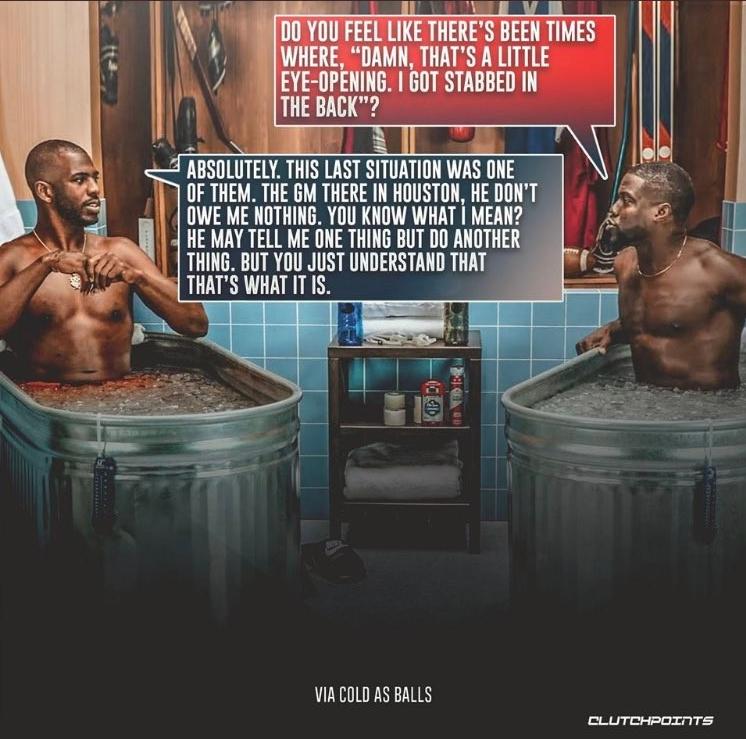 A very raw answer, as the questions Hart asks evoke unscripted answers, CP3 remained professional in reaction. As small parts of the truth continue to come out from that situation, it will become more and more interesting to follow.

Thursday night, Woj surprised everyone with an early season “Woj Bomb” announcing that the Portland Trail Blazers were signing the 10x all-star to a non-guaranteed deal. Carmelo had been a player reportedly on the Blazers radar for quite some time. They lost out on his initial trade from the Knicks to the Thunder, they when OKC sent him to Atlanta (who then waived him) he chose the Rockets. So now, the Blazers will be giving Melo an opportunity to play in a winning environment, and prove his worth. He is also filling a need for the team at the moment as they are missing frontcourt presences due to injury. After seemingly being blackballed by the NBA for no apparent reason, an opportunity Melo has longed for over the last year has finally manifested.

Reports surfaced earlier this week that the New York Knicks were “laying the groundwork” that will lead to the likely firing of Head Coach David Fizdale. Coach Fiz, who has only been on the job for a little over one season, chose the Knicks in large part because of the opportunity to coach and build with Kristaps Porzingis. The Knicks, since hiring Fizdale, have not given him adequate roster talent to coach. Therefore, expectations should have been just about as low as can be given the state of the franchise. Not only have they shorted Fiz on talent, they even lowballed Durant on a contract offer this summer which is unfathomable. Knowing that along with Durant would have come Kyrie Irving, or even if it were Durant alone, you cannot let a talent of that stature slip through your fingers by playing it cheap. It would be completely unfair and unjustifiable for Coach Fiz to lose his job in the near future. Should it happen, it would further evidence.

Other miscellaneous things that caught my eye

-Downfall from the Morey tweet continues to linger on

-Gordon Hayward’s broken hand came with such bad timing as he was beginning to seem like the Utah version of himself, with better talent surrounding him

-Is it too soon to say that Phoenix is legit?

-Karl Anthony Towns wants all the smoke! His play suggests he’s backing it up as well

-Luka Doncic and Trae Young are ascending at an unreal pace